According to the latest immigration news, Canada’s immigration department doesn’t recognize virtual marriages for family-class sponsorship. However, foreign spouses might still be able to cross the border. Even though IRCC is making changes because of the COVID-19 pandemic, online weddings through Zoom are still not accepted legally for immigration to Canada.

IRCC states, “if one or both parties are not physically present at the ceremony, we won’t recognize the marriage.” So, if you want to bring your spouse to Canada and plan to get married online using FaceTime or Zoom, you might want to rethink your agenda.

Before June 11, 2015, Canadian immigration law recognized marriages that took place online, that is, even if one or both of the people getting married weren’t there in person. The only rule was that the wedding had to be legal in the country where it took place. But this no longer holds legal. The main difference is that, according to the Immigration and Refugee Protection Regulations, for a couple to be considered for spousal sponsorship in Canada, both people must be present at their wedding.

Now, more than ever, it’s important to talk about virtual marriages. Travel restrictions are in place because of COVID-19, so many couples who live on different sides of international borders are looking for ways to be together. But the new decision is giving some cross-border couples trouble today.

Why was the novel law established?

This decision was made to stop people who were married against their will from being able to move across the country without their consent. This kind of abuse is easier to impose with a proxy marriage because neither person has to be there for the ceremony. Simply put, it is easier to force two people to get married if they are not the ones signing the contract.

What does the IRCC do to make sure families stay together?

During the pandemic, the immigration department has devised several ways to keep families together. Recently, the IRCC made it easier for spouses and other close relatives to come to Canada if they plan to stay for more than 15 days. But the IRCC says that proxy marriages are not taken into account in any particular way as the Canada IRCC is pretty strict with that.

So there are strict rules. Does that mean that married people’s lives get restricted?

Even if there is a virtual marriage, it doesn’t mean you’re out of luck. The rules are in place, but that doesn’t mean that people who got married over video call don’t have any other choices. For example, even if a couple is married, they can still be considered common-law partners if they have lived together for at least 12 months in a row and meet all the other requirements. In addition, if they are allowed to cross the border, they may also be able to get married in Canada for IRCC’s purposes.

Suppose, your spouse or partner can’t apply from inside Canada or doesn’t legally live in Canada at the time of the application. In that case, outland sponsorship is probably the only way to sponsor them.

Are there any exemptions?

Only if you are in the Canadian Armed Forces could you be immune to the law. Your wedding could be recognized if:

As the world changes in the blink of an eye, many rules and laws also change. Sometimes, new ones are even set in place. This holds true for citizenship in Canada as well. Because of this, family new immigration is hard to deal with if you don’t know a lot about the laws. 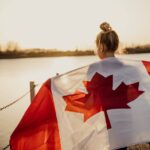